Yumika is a supporting character in the drama Box "R". She is portrayed by Chiori Amamiya.

She is an honor student and endures everything, bottling up all her emotions, much like Natsu[1].

From the beginning Chiori never wanted to play Yumika seriously for she felt that the role was too similar to herself[2]. But when Kyoko finds her Natsu, it is Yumika that is the odd one out "the circle trying to match a triangle and squares[3]" as the Director puts it. Chiori struggles to understand what the Director wants to see from her, with expressions such as a 'snap' or a 'glint' like feeling[4]. She presumes that he wants her to change her looks like Kyoko, who made herself look more mature so she cuts her hair[5]. This isn't what the Director wanted for Yumika was supposed to be the cute one so they end up tying her hair up in two ponytails[5].

Although determined not to play the role seriously Chiori is forced into it as Kyoko/Natsu blackmails her by using one of her poison notes[6]. However once she accepts the fact that she was running away from her past because she was scared of the same thing happening she acts the role with the appropriate seriousness to the point where Kyoko thinks she became a better partner for Natsu than Kaori[7].

Yumika is the cute one of the group. She is probably the most similar to Natsu in the way that she hides her dark emotions and lets her feelings loose[2].

She takes enjoyment from the bullying too, taking a very active part as Natsu's 'right hand'. She seemed to be the lowest ranked in the gang because she was described as a 'cheap right hand that can be disposed of once tarnished[8]' by Natsu. However, through Chiori's portrayal of her, she became a better 'right arm' to Natsu than even Kaori[7].

Yumika wears her hair in two high ponytails. She is often seen in her high school uniform, but without the ribbon like the rest of the gang[5].

Chiori was very disappointed and angry when she hears the bad reviews after Box "R" aired, for she said it felt like déjà vu was happening - being stuck with a bad/intense role[9]. 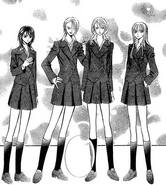 Add a photo to this gallery

Retrieved from "https://skip-beat.fandom.com/wiki/Yumika?oldid=41348"
Community content is available under CC-BY-SA unless otherwise noted.