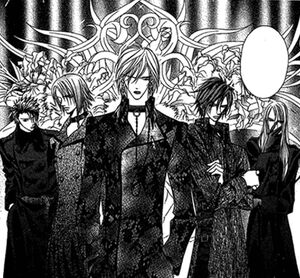 Vie Ghoul is a visual kei band whose initial goal was to copy Sho Fuwa and subsequently take his fans and his place as a pop idol. When Kyoko first hears about them she mistakenly thought their name was "Beagle"[1], and she often refers to them as such, including calling the lead singer Reino "that beagle". The band members are extremely loyal to Reino and will assist him in stalking Kyoko.

They meet Kyoko while waiting to do an interview for Japonet Scope. Reino comes to meet the Angel who starred in Sho Fuwa's PV and is unimpressed when he meets Kyoko in her dressing room[2].

The rest of the band meet her on stage and say as much as well. They insult her by calling her plain and dismissing her role in Sho's PV putting her looks down to make up and CG[1]. During their interview Kyoko notices that they were giving the same responses as Sho had in an earlier interview[1]. Kyoko realizes that they are blatantly copying Sho with their unhealthy-like image and risque outfits but nobody seems to have noticed. Reino and the drummer, Miroku, follow Kyoko when she goes to confront Sho who also has a spot at the same TV station[3]. Reino, who was at first uninterested in Kyoko, is now fascinated by her due to her grudges, being psychic he is able to see them. And her relationship with Sho is a lot more complex than what they initially thought[3].

Vie Ghoul make it deliberately difficult for Sho to record a song, using the same recording facilities as him (Wood Stick in Karuizawa), spying on him and stealing any songs he writes[4]. Even having the gall to stay at the same hotel as him in Karuizawa. Sho finds it in him, with help from Kyoko, to fight back against the 'clones'.

Outside the hotel bathhouse Vie Ghoul feel at first annoyed at Sho who is laughing at them without abandon (now having visual fodder for the 'beagle' prompt) and then pity, for maybe he is a fool who doesn't realize he is the one they are ripping off[5]. Reino makes a truly nasty threat that causes Dasuku, Shizuru and Kiyora to roll around in the sheer evilness of it[5]. Sho wonders if they are sick in the mind and body. With his psychic powers Reino then senses Kyoko's exit from the baths, who gasps in surprise at seeing them at the hotel. Reino reminds Kyoko of their earlier meeting at Wood Stick (their eyes met through the glass) while fondling her wet hair. Kyoko freezes, unable to move due to his psychic power until Sho intervenes[6]. Sho and Kyoko bicker making VG wonder if they are going out which they furiously deny. Too bad for apparently Reino was going to take everything from Sho but a plain girl like her wouldn't suit him[6]. Reino smirks it doens't matter whether she's Sho's woman or not as long as it's her... Sho is shocked that VG admitted to copying so easily, like they didn't really care if they were discovered[7].

VG hear that Sho is writing a new song via the spy in Sho's group. Miroku smirks thinking that Sho is more interesting than he first thought since he didn't change recording studios[8]. He asks Reino if he wants to steal the new song. Reino ponders this, thinking back on Sho's laughing at them. Shizuru ask where is Sho now, working like crazy to finish his song?[8] Dasuku says apparently his disappeared since early morning and his manager is looking everywhere for him. Reino recalls the serious expression Sho got on his face when Kyoko was threatened and smiles as he stands. Miroku wonders where he is going. Still smiling he says "to go see Little Red Riding Hood[8]"