Tragic Marker is a film that is yet to premiere. The movie shooting ended at the 10th of April. Taira Murasame and the mysterious Cain Heel portraying a cold-blood murderer and a death god, B.J. It is directed by Konoe.

The production of Tragic Marker was different in that the Director created a role within a role. The Director of Tragic Marker wished to keep the identity of the actor who plays BJ a secret. Therefore he created Actor X (Cain Heel) as the actor who will portray BJ so the staff and fellow actors will not know the identity either. His name will also not be displayed in the credits leaving the audience wondering who it is too.

The movie shooting includes some in another country, Guam. Tragic Marker is led by the protagonist, Koji.

In the year 1986 a series of murders occurred in England, altogether there were five victims of varying age and gender. A certain message was left written in the victim's blood, the perpetrator, who committed his murders out of bloodthirstiness and for public attention is said to take the hearts of his victims. Those familiar with his story or involved often referred to him as 'the Reincarnation of Jack the Ripper.'[3]

His real name was Jack Darell, aged 25 at the time. Using his natural cunning and intelligence, Darell escaped from the police and was able to continue committing crimes.  8 people in France, 15 people in Germany. The crimes extended to other countries and were so severe that he became 'A Most Wanted' criminal internationally. He was registered in Interpol's Blacklist for extreme felons. His number was 21. For this reason the police forces in charge... began calling him 'Black Jack'[3]

And yet, even after that, Darell didn't stop. He murdered 20 people in Italy and in 1991, in America, as if to provoke the police, he killed 50 people in a violent bloodbath in broad daylight. In the end, he was shot to death, then and there by the cops who came to the scene yet Jack's name was not taken off the Blacklist because...

And then in the year 2021 the leading figures of a certain country were killed one after another. The hearts were gouged out and a message written in blood next to the corpses. The perpetrator was Darell. Darell was shot dead a second time, his corpse remained in that country's custody but once again it disappeared. And then time went on...

In the year 2031, once again, the devil appeared accompanied by a message in blood 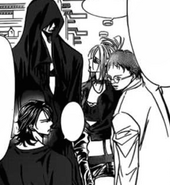 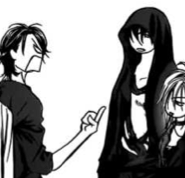 Most actors would not have liked such a request, hiding their identity for it defeats the purpose of being an actor however Ren Tsuruga agreed to this strange proposition for he wished to use Cain Heel and more particularly BJ to channel and, hopefully, beat his inner darkness that is his past self, Dark Kuon. Ren has trouble controlling his dark urges, being overwhelmed by Kuon both as Cain and during a rehearsal as BJ[4]. He manages to find the inner peace[5] and stability he needs to continue with the role through Kyoko's influence and presence. Both he and Kuon reach an agreement for they both have a unquenchable passion for acting and both of them love Kyoko so they wish to put on a performance with and for her that she will not be disappointed in[3].