Natsu Kitazawa (北澤 ナツ, Kitazawa Natsu) is the main antagonist in Box "R". She is portrayed by Kyoko. Many anticipated what Kyoko's next role would be and thus Box "R" generated much response, and was the focus of many talk and variety shows.[1][2][3][4]

She is an only-child from a middle-class family with loving parents who dotes on her.[5]

Kyoko got this role after the Box "R" director, Kazutoyo Anna watched her Mio on Dark Moon.

Initially, Director Anna wanted Kyoko to act exactly like her role as Mio.[6]

Kyoko's portrayal of Natsu lacked charisma, and lacked the ability of being a queen bee so she asks Ren Tsuruga for help. Ren helps Kyoko by teaching her some modeling skills which she uses to bring her Natsu to life.[7]

Natsu is liked by everyone around her for she is quite charismatic. With little effort, she could still have great results in school and other areas. But in truth, she finds her life tedious and boring, so she enjoys bullying and humiliating others. Natsu has a presence that draws people to her thus she has a group of followers. She is mostly described as a sadistic queen bee.

Natsu is usually seen in her school uniform or fashionable clothing. Her hair is combed into a side parting and she generally wears minimal makeup

After Kyoko established her own Natsu, the role mesmerizes and scares everyone. While filming the unscripted bullying scene almost all of the crew and cast found Kyoko's Natsu to be unsettling[8]. Honami Makino describes Kyoko in the bullying scene to be hard to keep up with. Yuka Sudo acknowledges Kyoko to be more like a veteran actress by not only assuming the role off-set but also the depth of character she portrayed.

When Box "R" is shooting on location nearby to Dark Moon's car stunt, Kyoko visits her Dark Moon colleagues in costume as Natsu. Many do not recognize Kyoko and those who are able to see her from one side of the bus praise her for a more mature and attractive appearance. Hidehito Kijima hears this and gets his curiosity about Kyoko stoked. Ren also praises Kyoko for her change into character. Director Ogata is also awed by her transformation and feels that girls can be amazing.

Yukihito Yashiro states that Kyoko's acting as Natsu is fantastic and very different from Mio's character.[9]. Kanae views Natsu to be more like a double lead role with costar Marumi Maruyama than an antagonist. She also feels that Kyoko will steal Marumi's "star" in matter of time.[10]

However the audience feels disappointed because they expected a harsh and more gloomy Mio, surpassing that of Mio in Dark Moon, but Natsu is far more subtle than Mio’s blatant viciousness[11]. There is still a chance their view will change because the drama has just started and has room for improvement.

Though the rating for the second episode wasn't so great, Natsu's character stands out for its significant difference from Mio. Having shown diversity in her acting capability, Kyoko receives many commercial offers. 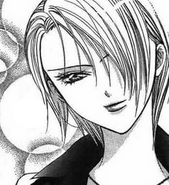