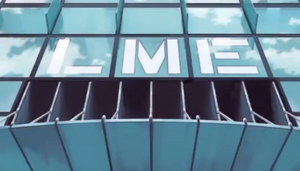 LME (short for Lory's Majestic Entertainment) is one of the biggest talent agencies in Japan. The current president of the agency is Lory Takarada, which the agency was named after. While LME has talents from all over the entertainment sector, its specialty are actors and models.

LME currently houses Ren Tsuruga, the most popular actor, frontman model of Armandy Asia and most desirable man in Japan. It also manages the popular singer, Ruriko Matsunai and the popular hosts of the Bridge Rock variety show. It also has a special section made by the president himself called the Love Me Section, which currently has Kyoko Mogami, Kanae Kotonami, and Chiori Amamiya as it's current members.

A view of the full building.