Kotetsu Uesugi (上杉 幸哲, Uesugi Kōtetsu) is a legendary actor famed for his martial arts. He is the head of a family that has been in showbiz for three generations.[1]

It is well-known that Kotetsu dotes on his grandson, Hiou.[1] He must indulge Hiou to some degree for Hiou initially behaved like he was quite spoiled.[2]

He is quite a strict person regarding traditional etiquette and discipline. He doesn't think much of Kyoko who asked for the lessons through Hiou however he is impressed by her display of shin etiquette - the most formal style and is able to guess that she practices tea ceremony from it. Kyoko thinks he has the art of turning a compliment into insult down pat and vice versa, for she suffers multiple blows from him during the lesson.

He shows a soft spot for Kanae as he addresses her as "Kana-chan" with a happy expression which is quite a contrast to his usual stern one.

Although he teaches many students he only remembers the names of those he believes are interesting and are worth knowing. After Kyoko's display of proper etiquette, he asks for her name which shows that he acknowledges her.

Kotetsu is elderly, but fit. He has short hair parted on his left side, a wispy goatee, and sharp eyebrows.

He is well-known overseas for his work in martial arts.

Apparently most of the time Kotetsu teaches at his personal Stage Combat School, but he goes to the training grounds from time to time if there is a collaboration request. He teaches historical etiquette for drama and also works as a sword combat choreographer for films[3].

Kyoko went with Kanae for her lesson and met the famous Kotetsu Uesugi for the first time. Kotetsu was happy to see Kanae, however unimpressed with Kyoko who used Hiou to get the lesson. Kyoko knows it was a bit shady the way she asked Hiou and that it was also last minute as well so she doesn't resent Kotetsu's animosity to her[4].

When entering the training room Kyoko recalls Yayoi telling her not to walk on the edge of the tatami mat. Smiling she falls into a deep dogeza and greets Kotetsu before walking into the room ensuring not touch the edges. Kotetsu watches her closely and tells her what she just demonstrated was shin etiquette - the most formal style used but also the most useless. She must have studied tea ceremony for practitioners of the art often use shin etiquette. Kyoko is amazed he was able to tell just from her greeting and disappointed that her past experiences won't be of use to her like they were during Ring-Doh with Ruriko. It is then that Kotetsu asks her what her name is, Kyoko tells him both her stage name and real name. Kotetsu tells her he will simply call her Kyoko[4]. Kyoko thinks wryly that it looks like she won't be getting the same affection as Kana-chan then. 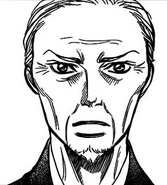 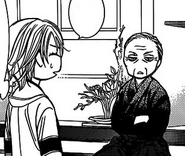