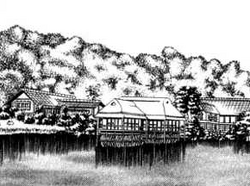 The Fuwa Inn is a traditional Japanese inn located in Kyoto, Japan. It was revealed in Chapter 225 that the Fuwa Inn was actually called "Shougetsu-tei" and is located at Kyoto-shi, Nishikyou-ku, Arashiyama, Nakayama 14-16.[1] It is owned and managed by Sho Fuwa's parents. This is the place where Sho Fuwa and Kyoko Mogami were raised. Kyoko worked at the inn since she was six years old, so she wouldn't be a burden on Sho's parents who were raising her.