Dark Moon is a remake of a drama twenty years ago, titled Tsukigomori and is directed by Hiroaki Ogata.

Katsuki Tachibana's father owed a big debt to the Hongo family patriarch, and chauffeured for his brother's family. While he was away on a holiday, all but the daughter, Mizuki, died due to a car accident, leaving Mizuki alone. Katsuki's father couldn't sleep and always had nightmares because of his suspicion that their deaths weren't an accident and he was complicit. One night, the moon was bright and dazzling. Katsuki, who was still a child, let the moon lure him outside to view it.

When Katsuki returned home, his whole family had been kidnapped and murdered by a man whom he'd seen once before, as well as seeing his face on the dreadful night his family was murdered: Mr. Hongo. Katsuki vowed to get revenge. Meanwhile, Mizuki got adopted by her uncle and grew up in their household with her aunt and cousins. She was never cared for, but nonetheless, she still grew up with a bright personality.

In the present, Katsuki is now a high school teacher and Misao's fiancé; he plans to use Misao to get revenge on her family. At the same time, he also starts falling in love with Mizuki, who is a student in his class and Misao's cousin.

Mizuki starts falling in love with him, too, but she knows it's not right because Katsuki is Misao's fiancé. Meanwhile, Misao's younger sister and Mizuki's cousin, Mio, who feels hatred for everyone around her, starts noticing Katsuki and Mizuki's forbidden love and becomes aware of Katsuki's plan for revenge...

The shooting of the drama went on for six months and they added two extra episodes due to the public demand. There are significant differences in comparison to Tsukigomori, like improvised scenes, characters, and even a car stunt.

Shooting for Dark Moon took place on a set, at a school and on location in the Karuizawa region.

It was explained by Kyoko that part of the Dark Moon plot has been amended from Tsukigomori halfway through the story, which also includes a car stunt in the final chapter.

The drama is led by Japan's most desirable man, Ren Tsuruga and the fast-rising actress, Itsumi Momose. The cast also includes Hiroko Iizuka, the actress who played Mio from the original drama.[1][2][3][4].Both Ren Tsuruga and Kyoko are handpicked by the director due to his expectation for them to be able to surpass the original. 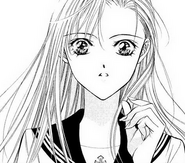 As predicted by Lory, Ren had trouble with the romantic aspects of the role. He received many NGs, which surprised everyone since Ren was known for getting things in one take. Ren struggled to the point of losing his ability to act in the middle of a scene. Director Ogata asked Ren to take a break and return after finding his own way of portraying Katsuki, leading to a shift in everyone's schedule. After some realization of his own feelings towards Kyoko, Ren surpassed the original portrayal of Katsuki.

To make it more realistic, Ren performed his own car stunt. But the first attempt resulted in an accident due to poor crowd control. The incident led to Ren having a PTSD-induced flashback that left him in a state of shock. He came out of it on his own and was brought to a hospital, where he was given a clean bill of health. Ren kept to himself what had happened and that it was focusing on the warmth of Kyoko's hand that allowed him to free himself.

Kyoko was given a hard-time by Iizuka, who felt that Mio was her own and a newbie may sabotage the role. Many cast members and extras also worried about this. Kyoko on her own cut short her hair and begin to portray the role in completely different version from the original version. After a few takes Kyoko proved them all wrong. Director Ogata begin to find Kyoko version to be more accurate rather he begin to see the flaws of the original version.

Kyoko's conflict with Iizuka over the portrayal of the role spread among ney actors which can be seen during the Momiji's audition.

During the Karuizawa shooting, Kyoko was stalked by Reino and almost tarnished but was saved by Sho Fuwa. This was hidden from the rest of the cast with the cover story that Kyoko was stalked by an unknown and she fell unconscious in the woods. Kyoko chose this to protect her hard work in portraying Mio Hongo, and to not have Dark Moon stained with scandal before it even airs. [5]

Itsumi lost her emotion in delivering her line when Ren kept on getting Ng's. After Ren find his own way of portraying Katsuraki, Ren deliberately challenges Momose during his acting test by arrogantly saying he will definitely make her act the way he wants. She sets out determined to not act like Mizuki, however is frustrated and anguished when she sees that through Ren's manipulations she acted out an even better Mizuki than she could have portrayed by herself.

After this incident, she vows to make herself a better actor. She goes as far as doing her own car stunt scene because Ren was doing his own stunt. This caused her more than a little anxiety, as well as called on inner strength, since she's not the type of person to even enjoy a roller coaster ride.

When deflecting the flirtations of some of the female crew at the Dark Moon wrap party, Ren mentions that the cast and crew can feel like a family. This comment could be taken as simple socializing. However, it is true that some of the cast and crew came to care for each other. Ogata and Momose were genuinely worried about Kyoko when she went missing after a stalker arrived on the set. The rest of the crew, including the man who Kyoko asked to keep Reino away from her, seem more ready to suppress or avoid gossip about it and showed compassion.[6] [7]

Before the shooting, Dark Moon garnered a lot of attention, often being compared to Tsukigomori. Many considered using an English title instead to be frivolous.[8] It drew a lot of speculation after the live Q&A reveal that Director Ogata was son of the director of Tsukigmori caused him to faint. Upon being aired, Dark Moon became so popular that it surpassed the original Tsukigomori in ratings.

Dark Moon surpassed Tsukigomori's records from twenty years ago. The drama became a top hit. The drama also had a special episode that includes a interviews with the main cast. It had three wrap-up parties with a numerous sponsors due to its high ratings.