Chiori Amamiya's mother is aware of her daughter's history regarding the acting world and her real personality[1] but it is only natural since she is her mother. Her real name is unknown.

She is genuinely happy for her daughter when informed by Yoshimoto, Chiori's manager, that Chiori is receiving more TV work and hopefully with Box "R" being so highly anticipated she will capture some peoples' eyes and get more work in dramas[1].

She is a little wary of Chiori who got angry at seeing her talk to Yoshimoto for she was worried she might have let something slip[1].

She seems to be traditional for she bowed to Yoshimoto, asking her to take care of Chiori.

She has long black hair which she wears in a low, short fishtail braid.

She was wearing a light turtle-neck skivvy with a dark, thigh-length jacket over the top[1].

She may have taken more of an active role in Chiori's acting career as Chiori was a child star and would've needed parental permission. It would not have been strange for her mother to have taken on the role of her manager.

Chiori's mother has a chat with Yoshimoto, Chiori's manager, as they wait for her. She seems very happy and overwhelmed for she actually sheds a few tears when she hears from Yoshimoto that Chiori's TV work is picking up and that they are expecting more drama offers after Box "R" is completed for it is being highly anticipated by the industry[1].

Chiori is obviously keeping the fact that she was a child star a secret from even her manager, who believes she only debuted four years ago. She hurries out and whilst Yoshimoto gets the car she drags her mother aside to ensure she didn't say anything weird or slip up[1].

He mother seems wary of Chiori, for she probably has knows the real Chiori having seen her when she is unmasked and voicing her dark thoughts rather than internalizing them. She quickly reassures Chiori that she didn't say anything and was just really glad to hear things were going well for her. Chiori tells her not to get ahead of herself as she walks off to get into the car[1]. 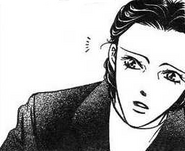 Add a photo to this gallery

Retrieved from "https://skip-beat.fandom.com/wiki/Chiori_Amamiya%27s_mother?oldid=43865"
Community content is available under CC-BY-SA unless otherwise noted.