Ground Call is the 230th chapter of the Skip Beat! manga series.

Saena continues to explain everything to Kyoko. Saena's story continues as more suspicious things happen involving Misonoi's actions toward her.

At the office, Saena is all sparkling with smooth, shiny skin. After looking at her for a while, Todoh says that her complexion looks really good and she must have slept really well last

She hadn't wanted to. She woke up in bed with Misonoi gone. Todoh had thought that his warning to take it easier hadn't sunk in. A passing coworker agrees, commenting that he'd worried her brain had stopped ordering her to sleep. Though she does a great job, her lack of confidence has been a problem. They were planning on slipping her a sleeping pill if she didn't sleep soon because she was so high-strung. Saena realizes something from that comment. While Fukuta photocopies some documents, he says that it was actually Todoh who was planning it.

Todoh protests, and he and Fukuta engage in some workplace taunting. Saena tunes them out as focuses on her memory of having taken a sleeping pill before. The sensation was very similar to how she felt drinking the oolong tea Misonoi made for her. She's absolutely certain that he had indeed slipped a sleeping pill into her tea, though she doesn't understand why he would have done that.

Moving into an employee locker area, Saena remembers him patting her head as she passed out, and is embarrassed that someone would do that to her at her age. That's something patronizing you do to a child and hadn't happened to her since she was a child. The only reason Misonoi would have slipped her a pill is if he thought she wasn't getting enough sleep... but he would have told her he'd done it. Saena has now changed her mind and decided that she must have just been extraordinarily tired.

As she opens up the folder containing the 3.5 disks that she'd brought home to work on without getting the chance to, she discovers that the second disk is stored upside down. She doesn't think she did that, but her memories are hazy. In any case, she should email or call Misonoi to let him know she can't see him for awhile due to work.

Later, a startled Saena wearing sweats opens her apartment door to a smiling Misonoi. She slams it shut again, embarrassed at her appearance. Misonoi convinces her to open the door and accept the hot food he brought, just to look out for her. He is promptly on his way again, and Saena eats the delicious food while she works on the computer.

The next morning, Saena impresses some clients whom she meets with for the first time. They see that she has a good grasp of the legal situation they are in, and are looking forward to things being settled when the trial begins in three days. Katagiri is also there, and he informs the clients that they can rest assured because there's a secret plan. They ask what it is, but back down when Katagiri says he can't tell them yet. Katagiri goes on to say defeat is impossible anyway. They only way they could possibly lose at this point would be if the other party somehow got ahold of their clients' developmental data. Worriedly, Saena thinks back on the upside down disc she discovered.

It bothers her throughout the work day, to the point that Todoh notices something is wrong. She continues to convince herself that she had made the mistake herself.

That night, when Misonoi arrives to drop off food, she grabs him by the back of his coat when he attempts to leave and invites him inside for tea. Only while she eats the meal he prepared for her, then he can be on his way so she can get work done. Misonoi stares at her while she eats, which makes her uncomfortable. Her phone rings and she takes it out onto the terrace for privacy, since it's a client. The call is short, and Misonoi pops out of the kitchen with a coffee pot in his hand. He offers to make her tea to take off the chill she must have gotten from going out on the terrace in only her blouse.

He leaves on schedule, taking the clean container from the previous night's meal with him. They joke a little about what a good wife he makes and he leaves. Saena is feeling happy and refreshed... until she notices that the same disc from the Josei case is flipped upside down again.

Saena is 100% certain she put the disc in correctly that day. Which means the only time it could have gotten flipped would have been by Misonoi while she was out on the terrace. His only purpose could be to get his hands on the development data. Which means he stole the data two nights earlier, but it takes 3 passwords to access the files... So he must have cracked the passwords in the last two days and stole the actual data that night. Which means he was giving lip service when he said that he'd be back the next night.

However, flipping the disc is such an amateur mistake for an industrial spy. Saena starts to doubt her conclusions that Misonoi is a culprit and the mistakes aren't just her own. Either way, she resolves to not take the discs home anymore, on the chance that the data hasn't been stolen yet. Also, she has to tell Katagiri about her suspicions.

Unsettled, Saena reviews her interactions with Misonoi—the home-cooked meals, his kind way of treating her, the quality time they spent together—all the way back to when they first met, wondering if it was all just a set up. She very much wishes to know what his true feelings are. When she gets home, she finds Misonoi waiting outside her apartment door. 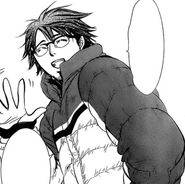