Marble Flag is the 226th chapter of the Skip Beat! manga series.

Lory and Ren talk how Kyoko suddenly wants to confront her mother. At the same time, Ren tells Yashiro that just by visiting and showing Kyoko the video tapes of him eating in Guam, it make her feel better. Kyoko contacts her mother's boss and asks to have the chance to meet up with Saena... is Kyoko challenging her mother?

At the breakfast table with his granddaughter, Lory talks on the phone with Ren about Kyoko. He is startled to hear that she intends to directly confront her mother. Though part of him is also unsurprised, as she tends to go to extremes. Ren points out that Lory had used the same method when he got in touch with Saena. Lory concedes the point and Ren goes on to express how worried he is about Kyoko and ask what they should do. Lory tells him to leave it alone. Maria takes off, without interrupting the phone call, which is what she usually does when it's Ren. This makes both Lory and Ren suspicious, but they decide that she's just being intelligent and sensitive. Ren decides to call her directly later on. Meanwhile, Maria walks on, clearly deep in thought.

Yashiro is with Ren in a waiting room, and he gets an alert on his phone that it is time for the two of them to head down. Ren continues to talk about his worry for Kyoko with Yashiro. He makes an offhand comment about his food videos giving her unexpected energy when she was down, and Yashiro tells Ren that he should keep making them. Ren is startled and asks why. Yashiro meloldramatically waxes poetic about the life-giving strength of others seeing Ren eating food. Ren is not amused at the teasing, but agrees to record a couple more in case Kyoko gets depressed again. Yashiro refers to them as a good luck charm, which makes Ren remember Kyoko's reaction to the infinity Love Me points he'd given her.

"I'll be fine as long as I have this," Kyoko said. "This infinite symbol is proof of my unlimited possibilities. And this "Great Job" is proof of my accomplishment. Success is sure to follow now that I have this stamp."[1]

Kyoko went on to say that it meant something because Ren gave it to her, which makes Ren think of the charm Rick told him about having the woman he loves write the message in ketchup on the food.

Aloud, Ren tells Yashiro that because everyone thinks of him as a top-notch success, people believe his autograph will give them luck. Yashiro admits there's some truth to the statement, but pokes fun at his vanity for saying it himself.

Ren, however, gets caught back up in the memory of Rick's "spell" and Kyoko's good luck. Somewhat groggily, he muses aloud whether good luck and magic are the same thing. Yashiro is very confused.

Waiting at a cafe, Kyoko looks at all her good luck charms: Ren's infinity stamp, her Queen Rosa necklace, and her Corn stone. She's ready to win the battle, the only thing she's missing is her battle armor: the Love Me jumpsuit. But, she's stuck in her school uniform, since that afternoon was the only chance she was going to get to see Saena, at Todoh's insistence. Over the phone, Todoh advised doing it right away before she got nervous and to take Saena by surprise. Kyoko decided to skip her afternoon classes after hearing that, though she regrets missing them for something other than work. Still, it felt like the right thing to do.

Kyoko had woken up that morning feeling foolish and pressured by the words she had declared to Ren the night before. She'd only said that she'd tackle the problem at the root because he'd blown all her negative feelings away. Still intending to keep her word, Kyoko justifies delaying to herself since she never actually said when she'd confront the issue. Yet, her eye is caught by her Love Me stamp book, and she opens it to Ren's infinity stamp. Her negative feelings wash away again.

Todoh arrives at the cafe, and Kyoko rises to greet him. He joins her and comments that she doesn't look at all like he remembers. Kyoko laughs it off, as she was only three or four at the time, but Todoh corrects her implication that they'd only met once. Still, he compliments her for remembering him. Kyoko admits she only remembered his name, not his appearance, but she felt it was likely the same person when she saw his name on the law firm's website.

Todoh expands on the risk she took if he had not actually been the Todoh she remembered. Had he not known who she is, he wouldn't have passed on the request for Saena's signature. Kyoko admits that she figured there was a 50% chance that she wouldn't get Saena's signature. Then she increased that chance to 70% if it had actually reached her mother, since her mother has gotten better at tuning things out. Todoh asks for Kyoko to explain what she meant by that, and Kyoko says it's because Saena always worried about appearances, but these days she's better at not caring what people think. However, if Todoh hadn't been the Todoh Kyoko remembered, and someone not already in the know had passed on a daughter's consent form to Saena, Kyoko knew that Saena would have forced herself to sign it.

Todoh smirks at Kyoko's wiles, and comments that she's a smart criminal. If both parents are smart, it looks like the child will turn out that way, too. Kyoko immediately jumps on the implication that Todoh knew her father and asks him about it. Todoh says he hardly knew him: never met him and doesn't know his name. Kyoko makes a face at the poor logic behind this description of "hardly" knowing... but then she's thrown when Todoh corrects himself to say that it is more accurate to state that he didn't know her father's real name.

Kyoko immediately asks for an explanation but Todoh tells her to ask Saena. He won't talk about the worse mistake of his colleague's life without her permission. The comment makes Kyoko reel. Knowing that the topic is such a landmine for her mother makes her reluctant to ask. Before she could have been blunt but not now. He must be why her mother hates her so much. He was never mentioned when she was yelled at as a kid, so Kyoko had always assumed he wasn't a factor in her mother's hatred.

Even as Kyoko leaves the café and accompanies Todoh in his car, her mind is only on this. Saena must have frozen her body and heart because she didn't want to mention him. Yet Kyoko herself sill curses in her sleep about Sho, so they're are not quite the same. Was Saena's experience similar, or even more painful? There's no way Kyoko can ask about her father now if that is the case.

She tells Todoh that she's changed her mind, but he points out that they've already arrived ath the law office and Saena is walking right past them toward her car. Todoh calls out to Saena, much to Kyoko's alarm. Saena approaches and chats with Todoh about Katagiri causing her not to wait for his guest. Internally, Kyoko is telling herself that she can't ask the question she came to ask, because she didn't go there to hurt Saena. Meanwhile, Saena recognizes Kyoko in the passenger seat and her face freezes. Kyoko gets out of the car. Mother and daughter face each other across it. 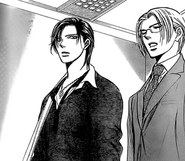