Dark Breath is the 192nd chapter of the Skip Beat! manga series.

Ren and Sho stand opposite each other in the parking garage. The next day, Kyoko is sad because Ren won't reply to her messages. Meanwhile Yashiro implies Ren has a dark past.

Yashiro is very worried as Ren and Sho standoff, glaring at each other in the parking garage.

It’s the day after the schedule overlap at the TV station, and Kyoko’s anxiously looking at her phone, waiting for Ren to contact her to express his anger. She’s disappointed that he hasn’t. She’d left a message explaining why she was with Shotaro, but still, nothing. He would have called back if things were OK.

He behaved like this after learning she’d been in Sho’s music video, so she knows he must be upset. Kyoko gets chills remembering how angry Ren was at her that time. She’s scared, because the two of them are to resume being the Heel Siblings that night. She’d prefer it if he said something nasty to her. She’d have to endure it, but at least she’d know how angry he is.

In the meantime, the Box “R” PA is looking for her, because they’re ready to shoot a scene with her.

Kyoko laments that she’d waited by the closest exit to where Ren was last night, but he hadn’t come out.

Makino finds Kyoko inside a tall cylindrical drum of some kind, where she was crouching in misery. Makino asks her what she’s doing, and Kyoko offers a false excuse of feeling extremely tired and hoping to hibernate until spring. Looking at her phone, she faces the truth that Ren is avoiding her.

Ren is shooting his commercial and they’re on break. Endo tells Yashiro he’s glad to see that Ren is more like the Ren people know today. The night before, he looked like he wanted to kill someone. Yashiro apologizes for Ren’s rude behavior, but Endo corrects him, stating that Ren wasn’t rude, just had a scary expression. In fact, Endo rather liked seeing a peak at the real man behind Ren Tsuruga. End offers to Yashiro his theory that Ren is mild-mannered now because he used to be a real bad boy. Yashiro doesn’t admit that he’s always thought that, too.

Endo comments that after Ren’s highly-praised performance as Katsuki, he should be able to play more evil characters now. Yashiro keeps to himself the fact that Ren’s playing a homicidal fiend, since that’s a secret anyway, and pretends to Endo to have the same hope for Ren’s career. He smiles and waves as Endo walks away. Without turning, Yashiro tells Ren to stop glaring at him.

Ren complains that Yashiro didn’t refute Endo’s theory about his past. Yashiro defends himself by claiming he was enhancing the mystery factor of his actor by keeping his mouth shut. With the reaction to Dark Moon, Ren’s fan base will only increase. He gives Ren a sideways look. “Besides, it’s true you used to be a bad boy.”[1] 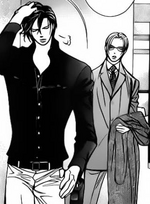 Ren turns away and asks Yashiro what makes him think that. Yashiro tells him that he doesn’t have any proof, only his first feeling when they met. Ren’s eyes were dark and gloomy, even when he smiled. He had seemed as if he were despairing… and yet in his eyes was a light Yashiro couldn’t describe and it scared him a little. “A 17-year-old who’d lived a peaceful and comfortable life would never have had that aura.”[2] Ren’s mature looks and behavior only solidified Yashiro’s suspicion.

Ren brushes Yashiro’s evidence off, claiming growing up with mature parents as his peers is why he himself was so mature at a young age. He then redirects by suggesting a coffee break. Yashiro agrees, but then tells Ren that his eyes right now look the same as they did the day they met.

This throws Ren off, making him stop and face Yashiro. His manager tells him that he doesn’t have to worry about being “Ren Tsuruga” today, not when they are alone. Then he asks what happened between him and Sho in the parking lot last night.

Ren remembers Sho arrogantly sitting on his car with his arms crossed, and tells Yashiro he doesn’t want to share. Yashiro asks him if he can go back to being Cain Heel in his current state. Ren promises to manage somehow and leaves the room. Yashiro watches Ren during the commercial shoot and has his doubts.

Later on, Ren is dressed as Cain Heel and sitting on his bed in the hotel room. He reflects that Yashiro already knows the version of himself he met that day long ago was the real him. Back then he couldn’t always switch over to “Ren Tsuruga” right away. That day had been one of those days because the night before he’d had a dream.

There’s a memory of a scene from the past: a woman running between two buildings, a car driving by, a body up in the air, and Kuon facing it all. Ren looks down at his watch, which is on his right wrist. He can feel Kuon just like he could back then, but he’s not on the surface, because the feeling would be more savage. So Ren is still managing to hold him down.

“No way she’ll fall for you,” Sho told Ren the night before. “She said she’d never be stupid enough to fall in love with you.”[3]

Ren grabs the wrist with the watch and squeezes. He reminds himself that he’s fine. He’s Cain Heel and the only two things that can move him are performing and his younger sister. He waits for her to arrive. 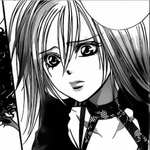 Jelly Woods is giving Kyoko the Setsu wig, which she recently cleaned. Kyoko apologizes for making her work so late, but Jelly finds it all good fun to be up to secret business at night.

Kyoko’s heart thumps nervously when Jelly tells her that Ren is already waiting for her. He was tired and acting like he was already Cain, so there’s a chance he’s asleep in their room. Kyoko’s brightens at the thought.

In the room, Ren takes off the watch, ready to greet her as the big brother she loves.