Dark Breath is the 180th chapter of the Skip Beat! manga series.

Ren has a disturbing dream of his time as Dark Kuon brought on by the fact that he was consumed by Dark Kuon whilst acting out BJ. Needing some reassurance and comfort he seeks out Kyoko, his protective charm.

It's both a dream and a memory. Some beaten-up guys apologized to Kuon for being too rough and they won’t provoke him to anger again. Kuon mocked them, claiming not to understand what they are saying because he is "just a Japanese bastard. Everyone knows that Japanese aren't good at English."[1] Kuon proceeded to beat those guys up until they became unconscious.

Just when Kuon is about to kick the unconscious guy, Rick and his girlfriend, Tina, arrive. Rick stopped Kuon pointing out that

the guy was already passed out. Did he want to kill him? They turn in surprise at a clattering noise and see one of the guys running off. The man pushed Rick’s girlfriend away and escaped. Kuon smiled and ran after him. Rick shouted repleated after Kuon for him to stop.

Suddenly, Ren wakes up. He has wrapped himself up in the blanket, like before, like a cocoon. He sits up to see that it is 1:40am on the clock. He remembers talking with Setsuka earlier. Setsuka commented that the BJ just now is like a devil and she likes it so she understands that he enjoys playing BJ because BJ and Cain are similar. It is like their souls are linked. [2]Setsuka giggled and said that even if BJ doesn’t have a soul.

She was surprised to see how surprised Cain looked. Cain asked her how she knew that he enjoyed the role of BJ. She told him that when he jumped on Murasame he smiled. Cain is stunned to learn that he smiled. Setsuka asked if he wasn’t aware of it. Cain looked totally taken aback.

Ren thinks that he didn’t expect Kuon to surface so quickly that he wasn’t even given time to think. He resolved that he would win

fighting the darkness, but this isn’t a fair match. Remembering Setsuka saying that the soul is interlinked, Ren lets out a laugh for Kyoko always goes directly to the point. Sitting up, Ren thinks he planned to release his darkness while playing BJ. He probably was Kuon while fighting Murasame. There was no opportunity for "Ren Tsuruga" to interfere; he totally forgot about acting. He wonders if he’s losing, if this continues, and one day, he’ll become that guy. Pulling the blanket on him, Ren fears truly becoming like BJ. If he can't act anymore, than he's simply a...

Tina shouts "Murderer!" in his mind and Ren trembles. Then, he remembers Kyoko holding his hand and calling out to him, visualizing her as if she were there beside him.

He sits up and is alarmed to see Kyoko’s bed empty. Outside, Kyoko looks at the clock and notices that it is already 2am. 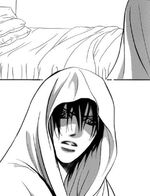 Holding a small bag, she notes that it only took 40 minutes to buy some things. She laments about not being able to sleep when she usually sleeps well. She really can't sleep comfortably in the same room with Ren and waking up before him as if she's watching over him is stressful. However he seems able to sleep just fine, curled up like a cocoon every night and fast asleep. Well, she sighs, they are siblings so it must be easy for him to relax. Actually that fact is what puts her at ease the most.

Thinking back on the day she is quite bothered about what happened, especially regarding when Ren froze after she told him he'd been smiling.

She heads into the elevator and continues to ponder that situation. She previously thought that perhaps it was Cain who brought about that smile which is why she said that they had a "spiritual connection," but his expression meant that it wasn't acting. Was Ren really not aware of it? How could an actor of Ren's level not have noticed something like that?

The elevator opens and she finds Ren standing with the blanket on him <- like a ghost, in the middle of the hallway. His eyes look empty and sad. Kyoko gasps in surprise at seeing him in such a state and worriedly calls out to him, "Cain, what's happened to you?"[3]