The Unseen After Image is the 124th chapter of the Skip Beat! manga series.

In the steps for Kyoko's journey on becoming Natsu, there's a symmetrical pendant, a confident model, a two-faced actress, and a faltering start. 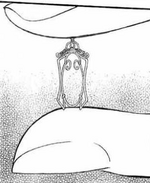 Backstage at the set of Yappa Kimagure Rock, Kyoko fashions a pendent for the Princess Rosa stone. One of the producers at the TV station expresses an apology for her still having to play Bo despite her current success as Mio. Kyoko explains that she hasn't even been in show business a year, so she's happy to take any job she can. The PA is surprised at how fast she started becoming successful, but is relieved to know that she's a newcomer, since he can't do anything to change her Bo situation anyway. He tells her that in show business, the career history doesn't matter as much as being able to sell.

This makes Kyoko recall her confrontation with Sho the first time she played Bo. Kyoko realizes she needs to be more salable as an actress than Sho is as a musician in order to get her revenge. Yet... she feels there's more to show business than just making the sale. Does that mean she still doesn't know the true meaning of being in showbiz? Would she get scolded by Sawara?

Bo's celebrity guest that day is a famous model and fashion icon named Honoka. Kyoko notes her change of costume between segments, her friendly attitude and physical bearing, and can't help feel admiration for this female icon. Kyoko definitely takes some inspiration from her.

Chiori, one of Kyoko's costars in Box "R", presents a friendly and pleasant attitude to all those around her, but secretly writes in a journal all her hate and anger at the world, particularly her hardworking and supportive manager.

Kyoko, with the support of Okami-san, gets all revved up to put on makeup and become Natsu, but in the end can't make herself do it, and only goes to the Box "R" shoot wearing the fancy shoes Okami-san and Taisho gave her for her birthday.

On set, Kyoko is made to do several retakes. Kazutoyo, the director, reminds her that he told her to relax, but Kyoko doesn't feel tense at all and doesn't understand why she's getting this note. Kazutoyo acknowledges that he told her to act like Mio, but he only wants it when she's being a bully, not when she needs to behave like an ordinary school girl. Kyoko is even further surprised, because she's not acting like Mio at all. Resentment and disrespect is clearly forming among her costars.