Suddenly, a Love Story- ****Repeat is the 93rd chapter of the Skip Beat! manga series.

Ren and Kyoko clear the air. Sho and Kyoko don't.

Kyoko is relieved that Ren doesn't seem angry anymore, but doesn't understand why since she hasn't apologized from the bottom of her heart yet.

Ren decides to ask Kyoko why she's there, even though he knows perfectly well. Kyoko hestitates and they're both picturing fairies. She smiles at Ren and tells him she came to recharge. Ren sighs and folds his arms, suggesting they head back. Kyoko is worried why he reacted that way and in truth Ren is worried he'll take advantage of being alone with her.

As they walk back, [1] Ren asks Kyoko what she would have done if she'd encountered her stalker during this walk. Kyoko had taken her phone with her and left a note for Itsumi, but she tells Ren that she knew he'd never be up this early. Musing aloud she asks if visual kei performers try to look unhealthy on purpose. Ren reacts to finding out that the stalker is a celebrity musician and from that moment Kyoko tells Ren everything. [2]

Kyoko confesses that she thought about calling Ren after the incident was over, but was afraid to tell him that her nemesis had to protect her. She didn't want Ren to become disillusioned and stop speaking to her. Ren tells Kyoko he'd never say or do something like that and inwardly frets about what on earth Kyoko thinks of him. Ren states that if the stalker is strong enough that a girl couldn't handle him alone, he'd never become disillusioned even if Sho did the protecting. Then Ren clarifies that Kyoko never asked Sho for protection. Kyoko flatly denies it, and Ren is relieved because he would have found it hard to overcome Kyoko turning to Sho instead of him. To herself Kyoko remembers that for one moment while trapped, she did think of Sho.

Back at the hotel, Itsumi is happy for Kyoko that Ren isn't angry anymore. She tells her that he must have been upset because his friend hadn't told him the truth and Kyoko balks at the image of being considered Ren's friend when she's so below him. Itsumi voices that when Ren got angry he was just like Katsuki, which means he's so method he slips into his character even privately. Kyoko doesn't correct her.

Kyoko spots Sho across a distance and goes chasing after him, apologizing to Itsumi.

In his room, Ren is eating breakfast with Yashiro, who's relieved that Ren is not angry. Ren forgives Yashiro for not telling him about Sho. Both of them know the reason why he didn't is the comment Yashiro made back in Okinawa: that if Sho were to show up in Karuizawa while Kyoko was there then the two of them must be bound by fate. Yashiro departs, saying he'll fetch Ren when it's time to go to the shooting location. Ren decides to work off his unusually large breakfast by using the stairs. Partway down, he overhears Kyoko and Sho talking.

Kyoko offers a token expression of gratitude for his role the day before, but also makes it clear she's not thankful at all. They start bickering and Ren feels the sensation of deja vu.

Sho reveals that he beat up Reino and Kyoko is incensed that he would do something so stupid. Sho says Reino's got too much pride as a predator to tell anyone that he was beat up by his prey.

Ren doesn't like how when the two of them argue, they create an atmosphere that's just theirs, no allowance for someone else to interfere.

Kyoko wants to know why, if Reino had no manly pride, Sho put himself at risk, too. Sho admits that he wasn't thinking about his own safety at the time, only hers. Kyoko is taken aback.

Ren remembers Yashiro's words about the two of them being bound by fate.

Kyoko starts to ask Sho why he would...

Sho starts to tell her...

Kyoko and Ren are seating next to each other in a sofa. Kyoko is holding flowers. Ren tells Kyoko that Kyoko doesn't have to be afraid of him, because he will only touch her a little.

The next scene, is the chapter cover 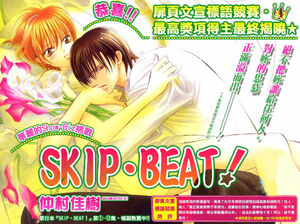 , which shows Ren embracing Kyoko tightly. Kyoko is then dazed, realizing that what Ren said is a lie and that she was embraced by him with his "emperor of the night" look. Meanwhile, Ren stays calm and says that the chapter cover should be sufficient for a requester who requested a scene of Ren hugging Kyoko with his "emperor of the night" look. Ren started reading out the next scene, but Kyoko shouts at him and says she doesn't want to do anything that includes him.